Installation of the three biggest DIVE-Turbines at the river Saale 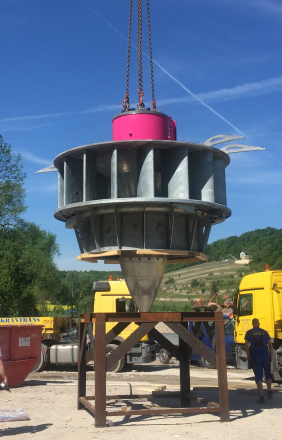 In May 2017 three DIVE-Turbines with runner diameter of 2380mm – the biggest runner diameter so far – have been installed at hydro power plant Öblitz at the river Saale.

The turbines – preassembled in factory with an overall diameter of almost 4 meter – were transported in convoy, from the factory in Amorbach to the construction site. The on-site installation had been completed within only few hours.

Fish friendliness and fish protection was one of the main issues in the concept of the hydro power plant. The power plant is now equipped with a modern fish ladder and a fish friendly inlet with horizontal rake and downstream migration system. Also the turbines are fish friendly: the runner has no gaps (propeller), only three runner blades and very low runner speed.

Moreover, flood-proof operation was playing an important role in the design of the power plant as well as the possibility to manage additional flow in case of flood, even if there is a grid-failure in the same time.